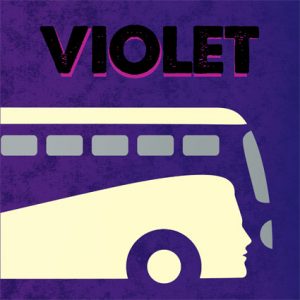 This musical about a young disfigured woman seeking physical and psychological repairs, opened off Broadway 20 years ago.  It won a couple of awards, including a Best Musical type of award.  Although the score is instantly forgettable.

Based on a children’s story about The Ugliest Pilgrim, it is the tale of Violet, who suffered a terrible injury to her face when her father was chopping some wood and the axe blade fell off and hit her.  So, now she is a young woman who thinks she looks like a freak, and she sets out from some small town in South Carolina on a Greyhound Bus bound for Tulsa where she hopes that some TV evangelist is going to heal her.

Laura Gronek plays Violet, and she meets up with a couple of GIs on the bus.  One is a white guy named Montgomery (Jeremy Cooper) and his travel mate is a black guy named Flick (Tyree Jones).    The bus travels through Tennessee, stopping in Memphis where one of the guys gets into it with Violet.  But, both of the men are interested in her and she’ll have some decisions to make.

Set in the 1960s there are some racial single entendres and insulting comments, both to and about Flick and Violet.  What you need to understand is that Violet’s dad (Michael Rostek) has passed on and when you see him teaching a young girl to play poker, that the young lass is Violet (Dorey Casey) at an earlier age.  And these images come and go several times in the story.  On the subject of coming and going, there are six other players who double in a dozen or more cameos.

Once Violet gets to Tulsa she tries to get the relief she dreams of from the preacher (Weston Slaton) who does a great job as the self-impressed preacher who can work miracles, although we suspect he is modeled on one or more of those who consider every donation a slight miracle.

What really moves the show along is the 5-piece orchestra in the wings under direction of John-Michael d’Haviland.

The show runs about one hour 40 minutes without intermission; so you may wish to visit the loo before settling in.   They’re located in Sandy Springs right behind Trader Joes.  Free parking, and easy to get to.  Visit them at Act3Productions.org