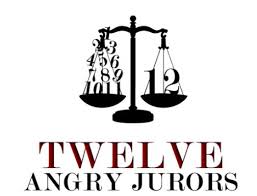 This is a jury of men and women, but the 12 of them have the same problems as did 12 Angry Men. They’ve sat through a trial where a teenager, with a rap sheet, is accused of stabbing his father to death. The DA is seeking the death penalty.

Is there to be a hung jury? That is the essence of the show and it hangs in balance through 2 acts, although total running time is only about 90 minutes. Johnna Barrett Mitchell directed this cast of thirteen players (one of whom, Sorsha Masters) is the guard from the court, and they argue and fight their way through the process of trying to reach a decision.

Not sure where the location was, but could have been by the 3rd Avenue EL in NYC. An old lady across the way testifies she saw the crime being committed as a train was passing by. A tenant in the apartment house testified he ran out and saw the defendant running down the stairs. But, things may not always be exactly what people think they have seen, and therein lies the question of reasonable doubt. Sam North, Jessica Wise, Patrick Croce, Katie Wickline, Angel Escobedo, Sarah Palm, Jack Allison, Aaron Hancock, Angela Van Tassel, Michael Miller, Franco Trelles and Justin Grey are on stage full time, as the jury only goes into recess at intermission.

If you’ve ever been on the board of a social service organization then you’ll easily relate to how getting an unanimous vote of 12 opinion-holders, is no easy task. Logic does not always rule, and predeterminations do not always persist. I can’t tell you the outcome but I can tell you these players at the small theatre, put a LOT of effort into this work, which could easily be one taking place in our own community these days.