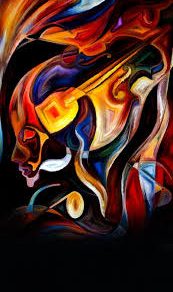 The GSO launched their new season at the Marietta Performing Arts Center under the baton of their new Music Director, Timothy Verville. The event was a delight in the way that the GSO blended music with other art forms.

They had a juried exhibition in the lobby with works by ten acclaimed local artists; and the performance by the orchestra was enhanced by the GSO Chorus, as well as projected images when they performed Mussorgsky’s Pictures at an Exhibition.

The first half of the concert started off with Rimsky-Korsakov’s Procession of the Nobles, a short by easily remembered piece; and followed by another short work, Samuel Coleridge-Taylor’s Danse nègre from his African Suite. They followed that with Manuel de Falla’s Ritual Fire Dance from El amor brujo.

The second set featured three of Bernstein’s dance numbers, and in this piece they brought onstage some of the players from their jazz band so that they could have a jazz play-off as if they were in Harlem. The audience loved it.

The GSO is now in it’s 66th season and it continues to grow and enhance audiences. The GSO Jazz Octet under Sam Skelton. They will perform on November 5th at the Strand Theatre on the Square in Marietta. For more info on any of their upcoming concerts just visit them at GeorgiaSymphony.org