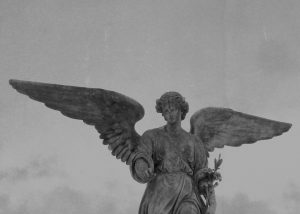 Tony Kushner wrote this truly epic work about AIDS in New York, and won the Pulitzer Prize for it in 1993. It is often described as A Gay Fantasia on National Themes, and is generally performed in two separate productions; the follow-up being Part Two: Perestroika.

Freddie Ashley and Martin Damien Wilkins joined forces to direct this work, in which eight performers take the stage in various roles. We start off meeting a high energy potty-mouthed lawyer, Roy (Robert Bryan Davis) who is a power broker playing the usual “old boy” games and wants to send his law clerk, Joe (Joe Sykes) to Washington to handle some matters favorably. Joe is hesitant both for fear of ethics violations as well as his wife, Harper (Cara Mantella) dealing with agoraphobia. And she’s not that certain about their relationship; not knowing that Joe may be homosexual as is Louis (Louis Greggory), a clerk in the same office. Joe’s mother, Hannah (Carolyn Cook) takes him for what he is.

Things start to really go awry when Roy is diagnosed with AIDS but doesn’t want to disclose the truth. In the same time Louis gets into a deep relationship with Prior (Grant Chapman) who also gets diagnosed and is on the way out. Roy gets some attention from a former drag queen and nurse, Belize (Thandiwe DeShazor). And we get to meet the angels played by Parris Sarter.

Against this backdrop the story goes back to the McCarthy era, and some of the wrong doings, such as the way Julius and Ethel Rosenberg were set up then sent up to die. It was not the best of times for those who sought equality, justice and freedom for all. And it does make one recall the great line from George Santayana who said “Those who cannot remember the past are condemned to repeat it.”

The show runs about 3 hours with 2 intermissions, and is beautifully staged and performed with great energy. It’s hard to believe that these same actors not only had to learn all these lines, but they also come back in Part Two, which will open on the 18th of January. It may not be for some of us who actually lived through those days and decades prior, but it does reflect on what we are seeing these days.

Actor’s Express is easy to get to downtown, with adjacent garage parking available. More info and tickets at Actors-Express.com