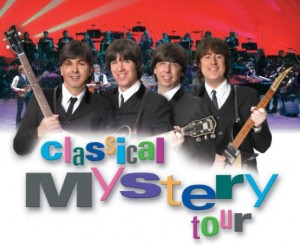 What is truly unique about the concert is that by having the quartet backed up by a full orchestra, you get to hear many of the tunes as they were done in the recording studios, because The Beatles didn’t tour with scores of musicians.

The ASO Pops orchestra did do a couple of numbers without the quartet, but they all played through another couple of dozen numbers. It was so difficult for many in the hall to resist singing along when numbers such as Penny Lane or A Hard Day’s Night were being done. Thankfully, the touring group did engage the house and invite us all to join in some numbers. The funniest was when they said that those under 30 should sing a line, and we suspected that they both did.

This group which started in 1996, has been well received in many countries and works hard on tour. From here they travel down to Florida and then out to Kansas City, and on and on. Could be called a Long and Winding Road.

Next up at the ASO will be the special presentation of violinist Itzhak Perlman with the ASO under Robert Spano on Sunday the 18th at 3pm. For more info and tickets visit ASO.org