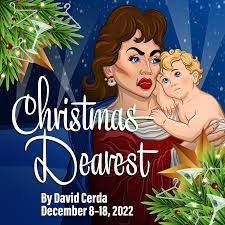 Joan Crawford was a star of the silver screen, but like so many in her trade, she wasn’t necessarily one who might be considered for sainthood. This play by David Cerda is based on the memoir Mommie Dearest by her daughter, Christine, which previously emerged as a film in 1981.

Christine told all about her Mom’s abusive behavior and harsh management of her family. It seems she could be a bitch with a bite. Directed by Jennifer Alice Acker with choreography by Precious West and music direction by Holt McCarley the show delves deeply in family matters and what really does matter.

Emily Nedvidek comes on as Joan, and Abby Holland plays Christine, while a cast of 14 more share the space at a holiday time that isn’t what most of the characters might have wished for.
A typical Out Front production where the production values must exceed 100%, and they do.

Easy parking, especially if you get there a bit early, plenty of goodies for sale, and a couple of hours that draw you in, in every scene. After all, if you are one of the casting couch gals who makes it big time, you want to be a star on Rodeo Drive.

More info and tickets at OutFrontTheatre.com