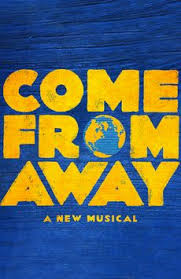 Come back in time 18 years to the day that terrorists took down the World Trade Center, and brought NYC and the rest of this nation to desperate thoughts and great grief. It was one of those events that shall always remain etched into our memory with the images from the TV coverage, akin to the assassination of JFK in 1963 and the death of Princess Diana in 1997.

But, with all the news stories centered on New York, the Pentagon and the heroic fight in the plane over Pennsylvania; little was coming out about the support of our allies. Ergo, few of us knew of, nor recalled, that for several days all flying over any part of the USA was closed off, including commercial aircraft coming in from abroad. The shortest routes from western Europe often skirted around Newfoundland and Iceland, and many had to stop to refuel en route.

The province of Newfoundland and Labrador, is in Canada; and Newfoundland is on an island near nowhere. The small town of Gander is home to an important airfield, which serves both as a military base for the Canadian Air Force as well as serving commercial flights. The total population of Gander in 2000 was maybe 10,000 and many were fishermen.

This musical brings to the stage the tragedy and the humanity of 9/11 and is a series of vignettes as we deal with the passengers and crew of an American Airlines flight which was forced to land there and was detained for several days. What is real is how the passengers were from many backgrounds; Black, Caucasian, Islamic, Jewish, Christian, gay; and children were among them as well as pets who were confined to the luggage hold of the plane.

The passengers were desperate to contact family and friends to advise abut their situation and learn how the others were doing. The amount of info the passengers were provided about the attacks was limited, and the phone system was totally overloaded. So where would these 7,000 passengers and crews from more than three dozen trans-Atlantic flights sleep, eat and live?

The people of Gander stepped up to the plate in a marvelous way. Every personal and community asset was used to house, feed and care for these unexpected guests. It is a true story about some incredible people and it moves each of us. We see it as a living example of the concept that the more we know those of other cultures, the less inclined we may be to harm them. And there is truth in the concept that when we help others we are helping ourselves.

A dozen hard working performers tell their tales by 15 musical numbers played by the onstage band of 8 players. The musical numbers may not be like Annie or Cats, but the essence of the story is one that no one who sees it shall fail to retain. It kind of makes you wish you could visit Gander one day; although few, if any, of us will get to do so. More info at FoxTheatre.org