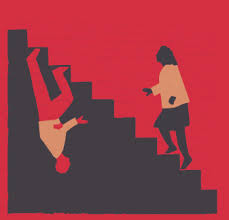 Ferocious playwright Theresa Rebeck has brought some eerie personalities to the stage in this work. Irene (Mary Lynn Owen) is a housewife whose life is mostly cleaning, cooking, grocery shopping and being submissive to her control-freak husband, Gerry (William S. Murphey).

The play takes place in the basement of Irene and Gerry’s home, on a really great set by Isabel & Moriah Curley-Clay. It kind of made me think how maybe I could clean up some of my garage junk. Irene’s younger brother, Teddy (Travis Smith), has moved in to the basement and is sleeping on some old couch and dining mostly on dry cereals.

And then the story starts to get stranger. Teddy is working on a “project” about which he says nothing, other than he has no money. He’s doing something with a really old computer down there where the monitor is an old style CRT. He claims he is on leave from his job, albeit we have idea if he is being straight about that one. And, he also tells Irene about some terrible afflictions imposed upon him by fellow employees.

Gerry, isn’t happy about having some crazy in-law living in his basement, and he wants him gone. And NOW. What is a basis of most of the play is that Teddy has made his psychological evaluation of Gerry, and thinks him to be possessed. Of course, Gerry feels that Teddy is a nut case, and they get into it face to face.

What is more important is that Irene finally stands up for herself and there are some secrets she has figured out that make her even more determined to rescue herself, since nobody else can do that for her.

Directed by Donya K. Washington, as her swan song local gig before hitting the road for a new position out west. The show is rife with screaming and some loud bangs that will possibly make you reel back in your seat. It is not for the kiddies, nor many of the Ms. Prims. Although some may think it possibly could be done in two acts, it is just one which is about 105 minutes, and it is a really good job done by all. More info at Actors-Express.com