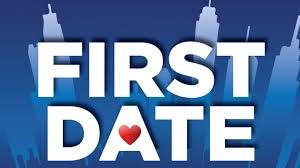 First date, Broadway’s Musical Comedy, is soooo much more than just a musical or the usual comedic presentation. Alan Zachary and Michael Weiner put this together based on the book by Austin Winsberg, and this one has legs for sure.

Aaron (Chris Saltalamacchio) is meeting up with a gal on a blind date. The girl, Casey (Ashley Prince) isn’t too sure what she wants out of this meeting, nor are either of them quite into being 100% open with the other. They meet in a café where there are two other couples. Michael Vine and Abi Sneathen are one of the couples and John Jenkins and Becky Ittner are the other couple. While we never know the names of one of the couples, their reason for being present starts to emerge as the talk fest between the daters goes to highs and lows, and some folks from their pasts seem to emerge.

Brian Brooks is on the scene as the restauranteur, as well as some other personae. The play moves along with 11 numbers in Act I and another 7 in the second act. Just know that when they get to the final numbers you do not want them to stop and just wished there were more.

Zac Phelps, who is a founder and artistic director for this local theatre group directs the action and also did the choreography, while Laura Gamble is the music director. The music is canned but 100% spot-on and just perfectly timed.

The company performs on the Lyric Studio On The Square, which is the black box stage behind the Theatre on the Square. This show is described as consisting of two people, one date, and every single voice in their heads. And so it moves with non-stop laughter and enjoyment.