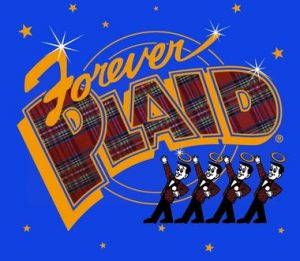 While this is one that resonates profoundly with the AARP crowd, it is one that audiences of any age will enjoy. Come back to the 1950’s and 60’s when we had maybe 3 or 4 TV channels, and we gathered to watch Milton Berle or Ed Sullivan as a group each week. It was a time when there were quite a few male quartet harmony groups doing their numbers. And high-schoolers thought it was a real experience to make out in the back seat of that Chevy.

The night that those four young men from England were about to debut on the Ed Sullivan show, one of the harmony four were rammed by a school bus heading to the show. Alas, none of the four survived. Stuart Ross created this show, which played in NYC from 1989 to 1994, and was later adapted into a film in 2009.

Eric Lang, John Jenkins, Keenan Rogers and Daniel Pino come on as the singers. They wanted to perform with plaid costumes and they come back from the afterlife to be forever plaid and sing their numbers. With Shane Simmons on the keys, they run through more than two dozen numbers in a cabaret style setting, and you can clap your hands, click your fingers and sing along as you wish.

The show runs as two acts, and in the second act they camp things up really well as they are imagining performing on a variety show, and they’ll bring back many old time performers’ schticks that most of us will recall.

The show is presented at the Lyric Studio on the Square, which is the black box stage behind the New Theatre in the Square. The company is a new one and this is the first of their first full season of five productions. They are a group of very hard working and talented performers who provide a very enjoyable couple of hours without commercials.