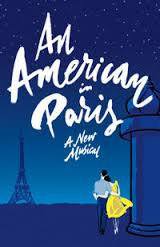 An American in Paris – A New Musical
Fox Theatre
through August 20, 2017

Hurry, hurry, hurry. Only two more days until An American in Paris will close here and hit the road on their incredible tour.

This is one of the best produced and performed shows in quite a while. It is a adapted from the film of the same name, but is basically the same story. After WWII a GI named Jerry (McGee Maddox) decides that he really loves being in Paris and decides to stay there and follow his love of being an artist. He meets and falls in love with a dancer named Lise (Sara Esty) who wants to follow her dreams as well.

But things get involved when she is being pushed to wed Henri (Nick Spangler) who really isn’t into that quite as much as his mother is. And unknown to Jerry and his friend Adam (Etai Benson) they’re trying to push Henri into asking for the hand of this un-named potential fiancé. And so the story goes of three guys and one girl and where it will end . . .

This show is one with incredible rear screen projections, great lighting and costumes and a live orchestra in the pit. Understand that this work was originally composed by George Gershwin as a ballet in 1928 and his brother, Ira, did the lyrics. When this adaptation opened in 2015 in NYC it won a bunch of awards including Tonys for choreography, lighting design, orchestration and scenic design. And they sure deserved it all.

The huge cast includes dozens of dancers of highest quality and when you see one of the numbers in Act II, you’ll swear you were in Radio City Music Hall. Kudos to the Dance Captains, performers and designers. And, yes, there is a story inside the story and I am not going to get into it. For it is for you to see and hear. But, the GPRF (Provisional Government of the French Republic), had it’s problems to deal with even after the German surrender.

Bottom line is this is a first class production directed and choreographed by Christopher Wheeldon, and one that you don’t want to miss. They’ve got rhythm and you’ll want to build your own stairway to paradise while watching. The scrims are fairly wide, so advice is to try to get seats in orchestra center.