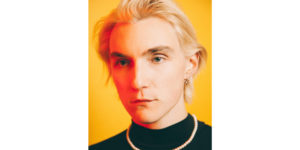 While many of us may often think twice before attending a one-actor show, this isn’t that kind of production at all. Peter Smith is a highly regarded comedian/actor who plays regularly in NYC.  They come on here as the transgender Charlotte von Mahisdorf, who was a real person and she wrote her autobiography in 1992; detailing all the events of her difficult life trying to stay safe through the Nazi era and the Russian domination of east Germany after WWII before that wall came down.

The Nazis were trying to eradicate gay citizens and they were sought out akin to those of Jewish faith. And when the Stasi took over in the east Berlin area, where she had started the Gründerzeit Museum, she had even more problems.

The play by Doug Wright was crafted in 2003 from his interviews and conversations with the lady; and the following year he won a Pulitzer Prize for this one. Peter Smith shifts gears and personae instantly when onstage as more than 30 characters. The story starts with Charlotte, nee Lothar Berfelde, as a youngster who kills her father and has to deal with that for the rest of her life. But she was a survivor in every sense of the word.

Graham Miller has directed this work and an incredible amount of energy goes into this one-act play. And while you may know where it is going; the journey is never as expected. A lot of patrons would gladly have stayed on for a discussion group. Alas, many of the younger members of the audience had not lived through the great war, nor been in Soviet occupied East Germany or been through Checkpoint Charlie on the Friedrichstraße.

This is another thought provoking fine production by the OutFront Theatre Company. Easy to get to off 10th Street with valet parking. More info at OutFrontTheatre.com