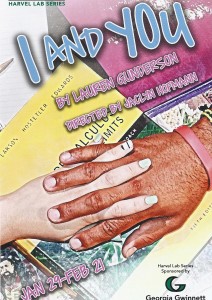 I and YOU
Aurora Theatre
through February 21, 2016

Lauren Gunderson’s play has received many kudos for dealing with the mind-set of a teenage girl with a serious kidney problem, who has retreated to her girl-cave where she can try to deal with both her current status as well as what she perceives to be the inevitable outcome.

The girl, Caroline, is played to the hilt by Devon Hales. She’s bitter and cares not what others may think of her. She is visited by Anthony, a black fellow student who comes to ask her to work on a class project with him. Anthony (J. L. Reed) seems to be everything that she is not. And, as the play develops, he becomes her donor-angel.

The play involves a lot of reference to Walt Whitman’s works, especially his Leaves of Grass. While the poem has generated many reactions to some sexuality as well as political commentary; it is one of those that many of us gladly avoided when in school. Whitman was a brilliant chap, but a bit on the weird side.

In the play Caroline seems to be the role model for Whitman’s quote “Resist much, obey little.” And she has decided, as he penned, “I exist as I am, that is enough . . .” Is Anthony real, or has be come to her like the ghost of John Barrymore in I Hate Hamlet? You tell me.

The show is staged on a static set designed by Lee Maples and is directed by Jaclyn Hofmann. It is in the black box stage with seating in the round; albeit you may lose a few lines here and there; but you’ll get the message. It may be that it was chosen after Wit because there are messages herein to promote the young female’s persona, help for patients, cooperation with those who may seem different, and dealing with adversity.

For more info and tickets visit them at AuroraTheatre.com