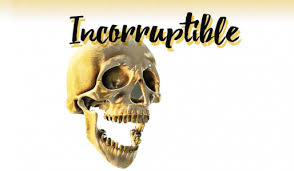 Michael Hollinger created a medieval farce which really rocks.  You’ll laugh from the opening lines to the end of this ecclesiastical romp.      The story is simple, in that it deals with a monastery which is in financial straits, and how the Brothers bend the rules as they try get things worked out.   If you want to dig deeply into the psychological essence of the work it might be said to deal with corruption in society.  But, don’t sweat it.  Just sit back and enjoy this one on the surface.

The monastery needs to have something that will attract pilgrims who will, in turn, leave offerings, which can be used to support the Brothers and their good works.   Alas, the only saint they have on hand hasn’t produced a miracle in more than a decade, while down the road a competing Nunnery has been packing them in with a saint who has been working overtime.   Well, the Brothers do finally hit on a scheme to solve their financial problems.

The Abbot is J. Michael Carroll, and he plays off so splendidly against Brother Martin played by Darrell Wofford.   Brother Martin must have been the inspiration for Bernie Madoff.   The other two bumbling Brothers are the novices Felix (Chris Schulz) and Olf (O’Neil Delaopenha).  Felix is a little light in the celibacy department and Olf is below scale in the brains dept.    These four have to deal with the local peasant woman who comes off like a raver from Manhattan so ably played by Katy Clark.

The excellent cast is rounded out by Sara Lynn Herman, as the love object Marie, who seems at times to have been an Olympics gymnast for the twists and jumps she does, and LeeAnna Lambert who plays the bitch Abbess.    The centerpiece role is that of Jack, the one-eyed minstrel which is a totally camped up role played to the hilt by Jef Holbrook.

The show, directed by Aaron Gotlieb moves easily on a neat set by Lizz Dorsey.   While it does suggest some improper clerical behavior, the facts are that sometimes folks don’t always behave just as one might expect.  I’m pretty sure most of the clergy could enjoy this one as well.  More info at OnStageAtlanta.com