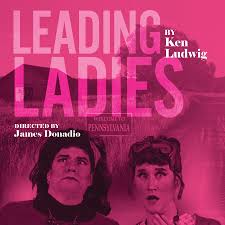 If you like to laugh at insanity, appreciate the works of Moliere, and have a really great couple of hours, get your tickets now before this one closes. Playwright Ken Ludwig is a celebrated artist whose plays have been staged around the world and have won quite a few awards.

This one is about a couple of washed up actors who just can’t make it to the big time. They read that some wealthy old lady has passed away and the bulk of her estate will go to some kin she hasn’t had any contact with in many years. So what would The Bard do?  Hop on the train to her home town in Pennsylvania and try to pass themselves off as her nephews Steve and Max.  But this starts to go awry in the opening scenes as the Steve and Max are really Stephanie and Maxine. No worries, mate. They had plenty of drag costumes in their luggage. After all, in Shakespeare’s days, women were not allowed to hit the boards; ergo all were played by guys.

Leo (Robin Bloodworth) now has to come on as Maxine while Jack (Allen Dillon) comes on as Stephanie. And inasmuch as this is a farce, know that as one door closes another opens, and the two leads change their costumes faster than most of us could brush our teeth; even if they were still in our mouths.

James Donadio directed this cast of 8 players, each of whom is first class. Suzanne Roush plays the old lady; who as Monty Python would proclaim, is not quite dead.  Even though her doctor (Rial Ellsworth) seems to be ready to proclaim her such.

Caroline Ficken and Casey Gardner play the two younger ladies of interest who may be sought by Steve Hudson and Blake Fountain as the two other blokes. But, as you get dragged into this one, you may think you can predict where and when something will occur.  But, as a member of your family would tell you; you are wrong.  The set by Stephanie Polhemus is quite good and works effortlessly to suck us all into the story, and all is a delight.

Closing soon; so if you snooze you lose. More info at GET.org