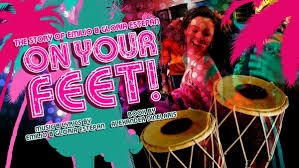 Hola! Come on back to Miami in the 1970s and 1980s when the Latino culture really started to explode. This is the story of a young girl who came to this country from Cuba and loved to sing. While it wasn’t the career that parents might have promoted it certainly worked out far better than anybody might have expected. For show biz isn’t easy no matter what your talents may be. This is about Gloria & Emilio Estefan, and is based on real history.

Most of the music in this energetic production is by Gloria & Emilio as it was played by the Miami Sound Machine. Justin Anderson directs a cast of two dozen players who dance and sing their way through more than 20 numbers, most of which featured Gloria when they broke through the barriers and hit the big time. Most of the story deals with Gloria studying to be a psychologist and helping care for her father, José (Arusi Santi). She meets Emilio (Max. J. Cervantes) who is impressed and asks her to perform a gig with him in Little Havana area of Miami.  Gloria’s mother (Lillangina Quiñones) isn’t too impressed with the idea, albeit Gloria’s grandmother (Felicia Hernandez) thinks she should follow her dreams.

As the story moves along Gloria and Emilio get tight, and they marry in 1978 and have worked together since then. There was a lot of trouble to get producers to want them to cut numbers in English, and they finally did break through that wall. For if you go down to SW 8th Street in Miami today, everybody understands both languages, even if they prefer one over the other. Pero, no problema.

While you don’t need to understand Spanish, you can understand and thoroughly enjoy the music and dancing, which is a really enjoyable part of the Latino culture. When Gloria & Emilio released Conga in 1985 it went to the top of the charts and you still want to get up and shake your hips to that one. The play does deal with a terrible accident that sent Gloria to the hospital and caused many to fear she’d never walk again. But this lady is a champ.

This show is selling out to really enthused audiences. In fact it was supposed to run only to April 12th, but has already been extended to the 19th. More info at AuroraTheatre.com