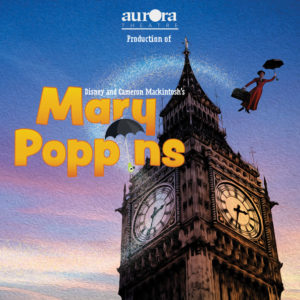 It must be tough sometimes to find a really wonderful Nanny, but you need to know that she’s back in town and the story, based on the book and the film and with some new additional numbers is a flight for sore eyes.

Directed and choreographed by David Rossetti, with the music under the baton of Ann-Carol Pence, a exciting cast of 25 players will sing and dance their way into the hearts of viewers of any age. You know the routine. Mr. Banks (Marcus Hopkins-Turner) and his wife get rid of a Nanny who was a loser and take on one named Mary Poppins (Galen Crawley) to oversee the lives of his two children, Jane (played by either Kayla Furie or Adrienne Ocfemia) and her bro, Michael (Jai Soundar or Max Walls).

The cast works and dances their way through about 30 numbers, each of which grabs you by your eyes and ears and one of the delights is the stage presence of young actors who are so professional. Backed by a full live orchestra every number is spot-on. You’ll almost want to get up and dance in Act II when all the workers Step in Time.

The show is in the new Lawrenceville Art Center, with plenty of free parking. But, get there early if you can and grab a bite at Cosmo’s across the street. If you like good NYC pizza and Italian goodies, they’re the best. And the theatre itself is a delight, with good view from every seat, and goodies to nosh on. More info at AuroraTheatre.com