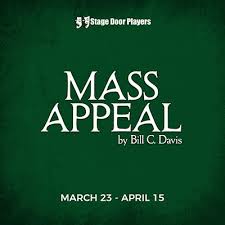 Bill C. Davis’ Mass Appeal deals with a priest and a young wanna-be, going through some funny but difficult experiences in their parish. A young seminarian, Mark Dolson, played by Brandon Lee Browning, has been assigned to be tutored by and work under Father Tim Farley, played by Mark Gray. There are some issues.

It seems that before the young man can be ordained as a priest he must first finish his studies, be approved by a Bishop and then he is still under control from those higher up on the ecclesiastical ladder. So Father Farley has Mark give a sermon at his church. But, the essence of the sermon becomes a problem when some parishioners differ in opinion, and therein starts the problem.

Celibacy is an issue and Mark is asked for his history therein. And while Mark is forthright, it may not be in his best interest. But, what is a wanna-be deacon to do? Fibbing is not an acceptable practice; but sometimes it may be required to achieve certain goals.

Directed by James Donadio on a set by Chuck Welcome, the show moves along quite easily, and while you may think that some folks would fall asleep or take a hike when faced with sermons; that is not the case in this production. It is not deep into issues of Church misadventures, and is one with plenty of humor.