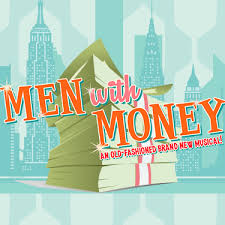 What a treat, to have a local theatre company produce a strikingly enjoyable premiere of a new musical show, that surely should go to New York. This show, book and lyrics is by Bill Nelson and some additional music and lyrics by Joseph Trefler brings us back to New York in the 1950’s when life was quite a bit different and less stressful than today.

Three guys live in a flat that a somewhat difficult woman runs. Ms. Mugsten (Candy McLellen) thinks that tenants should actually pay the rent they owe, or get tossed out. She comes on as a tough gal who is unanimous in her decisions.

The three guys are Louis (Sean Doherty), Max (Marcello Audino) and Sonny (Kenny Tran). They put together a plan which is based upon each finding some wealthy person to wed. The story gets a bit complicated with such facets as the objects of adoration may not all be female, their presumptuous posing as well-to-do single gents can be seen through by many, and each of them is not always sure that whatever he is thinking may be the best idea.

One of them falls for a wealthy guy they call Frenchy (Jimi Kocina) who wants to take him on a holiday to Havana. Ooops. The guy thinks Havana is in France, so it gets pretty silly. Kind of reminds one of when Sky Masterson takes that gal there. Then one of the others goes for a wealthy gent (Cecil Washington, Jr.) who runs Marvatech. And the third one goes for that wealthy tycoon with a yacht (Brian Robinson).

A couple of others weave into the story as one of them is a secretary named Thursday (Adrianna Trachell) who works for one of the rich guys, and a good looking hot dog vendor (Daniel Wisniewski) who may not be quite the chap you expect him to be. But, nobody gets killed and all comes out right in the end.

Justin Anderson directs this grand scale production, which has some great dancing choreographed by Ricardo Aponte with the live band under the baton of Ann-Carol Pence; and the scenic designs by Julie Ray are all Broadway quality. The show runs a little more than a couple of hours, featuring 20 new numbers, a terrific story line, acting, singing, dancing and it really draws one in.

They are playing to full houses, so visit their website for more info and tickets; AuroraTheatre.com