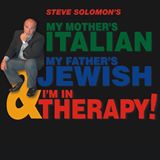 My Mother’s Italian, My Father’s Jewish and I’m in Therapy

I was sitting there, laughing my toosh off and thinking how the folks at Century Village or in Boca or Delray would dig this great one-man show.  Duh!   Steve Solomon did work the houses in south Florida, was on the cruise ships, and probably has done Vegas and Reno by now.  When his show finally went to NYC it ran for more than 4,000 performances.

Andy Rogow is a renowned producer/director in the South Florida Theatre League and has directed this event which is produced by Abby Koffler, also from South Florida.  So they all know the routines are not fictional but a reflection of real life; just like the days when they met at Wolfie’s on Miami Beach.

This guy grew up in Sheepshead Bay area of Brooklyn which was really a melting pot; especially if you liked brisket and noodle kugle.  He worked as a teacher, although his true calling was comedy and he started off in his second career when he put together this show, which now has three spin-offs.

As a Yankee from Beantown (Boston) I really enjoy the different accents and persona which Steve projects.  In this work he does a couple of 40 minute sets which are spiced up with some sound tracks when the phone rings.   He is one of those who would agree whole heartedly with me when I opine that when you look up “dysfunctional” in the OED, it should say “see family”

Steve can bring together the guilt trips, the interventions and the day to day experiences of those of us of a certain age and background.  It may be too late for me to launch a career as a sit-down comic; but it doesn’t impede my desire to join in and enjoy the hilarity which Steve Solomon delivers.

It’s a honor and a pleasure to have him doing his schtick here and living here in Marietta.  Let’s hope he decides to stage another of his works here.   The Strand is right on the Square in Marietta, easy to get, a free parking garage across the street, and plenty of restaurants nearby.  For times and tickets visit them at EarlSmithStrand.org