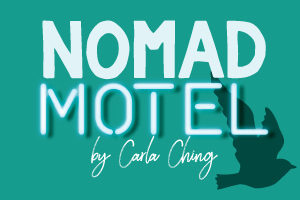 The Horizon is one of three theaters in this rolling premiere of a new work by Carla Ching. Directed by Melissa Foulger, it is a story about a couple of young folks in southern California, each trying to find their way through problematic times.

Ashley Anderson comes on as Alix, a student who has to finish some papers for her high school diploma, and having tough times getting through. She lives with her mother (Liza Jaine) in a crumby motel, and she works at many job trying to help her mother and two younger siblings get by. They have no permanent address and when the monthly rent comes due, it may often be the time they must evacuate and move on to another dump.

On the other side of the economic divide, Mason (Kevin Qian) is a student who is really into music and he is what is called a parachute child. He’s also trying to finish up some essay type of thing for school. His father, (Wai Yim) brought him to the States so he could get an education and go on to an Ivy League college and become a wealthy businessman. Not at all what Mason is interested in. But, he’s living pretty well in a home that his father owns and he gets a stipend each month for food and expenses. Well, most months. Something has come up and his dad, who is in a shady enterprise in Hong Kong, seems to have gone missing for a while.

Meanwhile, a young man from the ‘hood, Oscar (Marcellis Cutler) was once a boyfriend of Ali,but that ended as they don’t seem to be getting anywhere. Howevr, at one point Alix moves in with Oscar, but that doesn’t work out too well, either.

It is a tale of two young people just trying to get through their difficult lives; and it is a not uncommon sort of experience for too many young folks these days. It sort of reminds one of the family pun about putting FUN back in dysfunctional. Each of the actors exudes great energy and the show moves quite well on a set by the sisters Curley-Clay. Horizon is in Little 5 Points, but has free parking and good seating. More info at HorizonTheatre.com