It is rare that we have opera companies presenting in the same time frame;  but this is quite a treat for us right now.  The Capitol City Opera Company is performing Man of La Mancha at Oglethorpe and The Atlanta Opera has brought Don Pasquale to Cobb Energy Center. 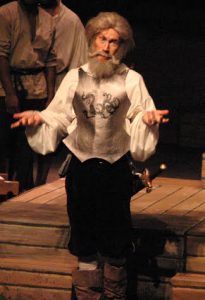 The story of the noble Don Quixote is a classic.  It takes place in Spain during the days of the Inquisition.  Miguel de Cervantes is thrown into a dungeon along with his man servant Sancho.  They are set upon by the other inmates and he appeals to the mob to let him keep his precious manuscript.  Then Cervantes (Jonathan Spuhler) and Sancho (Daniel Weisman) segue into a play within a play, about a knight errant who seeks to correct injustice in the society.  Aldonza, a/k/a Dulcinea, is sung by Rachel Eve Holmes.

This production is staged pretty much as it was originally done, on a pretty stark set.  The orchestra is on a riser at stage left, and there is a draw bridge at stage right where inmates and jailers may descend into the dungeon.

Directed by Michael Nutter, the cast of more than 20 players really put their heart and soul into the story;  and while we all know The Impossible Dream and Man of La Mancha, there are about 30 numbers in the production.  The opera closes this week, so get more info at CCityOpera.org 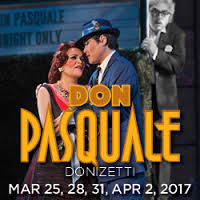 And, over in Cobb you can meet up with another weirdo.  This is not Donizetti’s original setting, as it has been camped up quite a bit to be set in Hollywood in the 20th century.  The story is the same, but the Don is “The Sovereign of the Silver Screen” as he produces black and white films.  Other than it may have physically moved from Italia to Rodeo Drive, the music, humor, story line and lyrics remain intact.

The show is staged as it had been in Cincinnati and several of the leads have also played in it there.  The Don is sung by Burak Bilgili.  His nephew, Ernesto (Santiago Ballerini) has chosen to wed a woman who the Don disapproves of.  Ernesto gets his friend Dr. Malatesta (Alexey Lavrov) to weave a web of deception to help get things worked out for him.  Georgia Jarman plays the vixen Norina as she takes over the old geezer’s life.  And Ji-Min Park sings Ernesto.

You’ll love the white faces, the silent film projections, and the man servant who may have been part of the Addams Family.  The parlando number in Act III is a hoot.  Even if you spoke Italian, you’d be clueless as to what was being said.  This is a pure delight, done with great set, props, costumes, visuals, and a full orchestra in the pit.  Joseph Colaneri conducts and Chuck Hudson is the director.  This is one of those you will be so pleasantly surprised by the production.  It is Opera Buffa at its best.  Their website is at AtlantaOpera.org