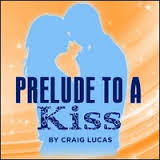 Prelude to a Kiss
Onstage Atlanta
through March 26, 2016

Duke Ellington wrote and Ella sang, Though it’s just a simple melody, With nothing fancy, nothing much, You could turn it to a symphony, A Shubert tune with a Gershwin touch. And perhaps this what inspired the film in 1988 starring Meg Ryan and Alec Baldwin. Then it went to the stage in 1992.

It has generated some reviews which come off as WTF is this all about, while others say it is to show us that we may benefit from being able to see ourselves in the bodies of others and therefore be able to see the world as others may perceive it.

It’s no secret that nothing becomes clear until the second act. We meet a young man, Peter (Chris Schultz), who hooks up with a pretty barmaid, Rita (Sara Lynn Herman), and after a heated 6-week relationship they decide to exchange vows. As the wedding takes place, an old geezer who looks like a hobo, played by Scott F. Rousseau, crashes the reception. The guests look at him and wonder who he may be. The old guy looks at some of them as is he once knew who they were. And before he leaves, he gently kisses the bride.

And that’s when the psycho aspect of this work comes into play. Peter and Rita take of for a honeymoon in Jamaica. It’s lovely, but Rita doesn’t see to be the same Rita he just married, and things start to go awry. It is only later that Peter finds out that within the body of the old guy there may not only lie the soul of Rita but a deadly cancer as well. Back in the 1980s it was assumed the writer, Craig Lucas, was asking viewers to think how they would react to somebody with AIDS.

This production, directed by Barry N. West takes place on a static set with various props which move in and out through the many scenes. If you are not into psycho-drama it could be a bit difficult for you to deal with. Or if you have had to deal with somebody close to you who has lost their marbles and comes off as a different person than the one you knew, that could be a bit hard as well.

In addition to the three leads, the cast is rounded out by 9 more players, and they do a good job with what has been written for them. While some of us may wonder if this one has legs, it is now onstage 30 years into existence. So there could be a message in that. More info and tickets found at OnstageAtlanta.com