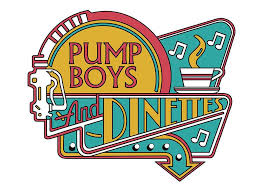 Pump Boys and Dinettes
Lionheart Theatre
through May 19, 2019

Urgent Warning: This one should be sold out every performance so you may want to go online or phone them to grab seats for a really engaging show.

This is not a play in the usual sense. It is a musical cabaret performance done on a stage setting which looks like some old gas station which had a diner section attached; akin to the old 7-11’s. The show is set on a road between Frog Level and Smyrna, NC; not that it couldn’t be anywhere they wanted it to be. But, that’s where the gents who created the play set it.

When it opened in New York in 1981 it had a good run, and was nominated for best musical although it didn’t win. It also played off-Broadway, and overseas and has from time to time been revived for appreciative audiences. It is a set of 19 country-rock numbers, very few of which you will recall. Probably the ones which you may remember would be Be Good or Be Gone, Drinkin’ Shoes and/or The Night Dolly Parton Was Almost Mine

In this version there are five good ole boys who work at the station and repair shop. They are also the ones who sing like the Barbershoppers. John B. Connell, Gregory Fitzgerald, Mark Hyde, Paul Milliken and Jen Smith are the guys. The five look-alike diner waitresses are Tanya Caldwell, Lisa Gordon, Courtney Loner, Rachel O’Dell and Nancy Lowery Powell. They sing like Sweet Adelines, dance and also double on glasses, cups, and other implements.

The show is directed by Scott Rousseau who also designed the really perfect set. The music is live with Lennard Martin, Joseph Hast and Sam Clamp working through every number. The show runs about 2 hours with one intermission. Easy to get to in Norcross, free parking, free goodies, and nice venue. For times and tickets visit them at LionheartTheatre.org