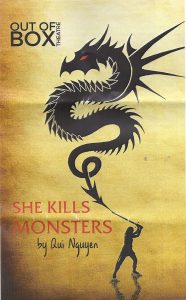 She Kills Monsters
Out of Box Theatre
through July 22, 2017

Playwright Qui Nguyen loves to write about nerds and geeks, and this opus is quite a voyage into the world of Dungeons and Dragons. If you’re an old geezer who thought nothing could get more complicated than a remote control for your TV, then get ready to travel through time and space into a world you’ve not seen before.

Or, just find somebody under the age of 40 and ask them to explain it all to you; because back in the days of Happy Days and the Fonz, we weren’t all sitting in front of an iPad or playing war games on a Galaxy Phone. Most of us never even messed with Pong or Pac-Man.

So be prepared, as the Boy Scouts would advise. For this work, which runs about 90 minutes takes you deeply into the netherworld. Directed by Will Brooks with terrific costumes, and exciting fight scenes; it is a story of Agnes (Kristin Storla) whose family, including her younger sister, Tilly (Ali Olhausen) perished in an accident. Tilly had been into D&D, and Agnes new not of the experience.

She hooks up with Chuck (Nick Cothran) who becomes her Dungeon Master and descends into her quest to find and restore the soul of Tilly. There is plenty of combat, some stress, some humor, and lots of somewhat gothic essence. It is NOT for the little ones, nor for the dowagers among us. But, it is extraordinarily well done, and the minimalist set works fine for the cast of 12 players as the tale unfolds.

Out of Box is easy to get to on Cobb Parkway up near the Big Chicken, and parking is free. More info and tickets at OutOfBoxTheatre.com    And, if you like comedy, next up will be The Only Light in Reno by Topher Payne. Check it out.