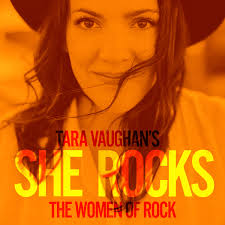 Tara Vaughan really loves to bring together a concert that reaches out the very hearts of those of us who were around during the 60’s and 70’s. But, while so many of the performers were men; she devotes her production to the women who created some of the music and belted it out. So the show is about women and for all of us.

The four piece band backing her up is Matthew McGuigan on bass, Ryan McGuigan on guitar and keys, Max Meyer on guitar and Adam Stoltenberg on the drums. In this performance her back up vocals were from Natalie Thomas who doubled on guitar. And all the performers, except Adam, got a chance to belt out some of the numbers.

She’s the present day hot number from Omaha; and she loves to put forth numbers you will recall from Janis Joplin, Linda Ronstadt, Aretha Franklin, Carole King and a host of others. There is no pre-show song-list, as Tara and the crew decide from day to day which of the hundreds of numbers they know, will be taken home by them.

This is one that works very well for the AARP crowd, and runs about 2 hours with an intermission. And if you love this one then know that on January 13, Georgia Ensemble brings back the one-night celebration of the Beatles, Yesterday and Today, where you even get to help decide which numbers they will play.