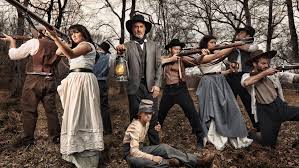 In 1965 James Lee Barrett did the screenplay which starred James Stewart as the patriarch of the Anderson family’s expansive farm in the Shenandoah Valley of Virginia.  And in 1974 the script was crafted into a musical which was nominated for 6 Tonys and went home with 2 of them.

This story is about a widowed gent, Charlie (Taylor Hicks), and his expansive family. They are on the edge of the War Between the States and would prefer to find peace and happiness than struggles and disasters. The show is played in the fields at Serenbe, where you will be in the presence of dozens more players, not including the horses and other wildlife.

Taylor Hicks is very well known for his appearances in American Idol, and he has great pipes. His daughter, Anne (Rachel Potter) is also a Broadway performer coming to the stage here in Serenbe. Each of the dozen principals are really great but the rest of the ensemble are right there as the front line moves into the Anderson’s turf, the choreography by Bubba Carr blows you away at the hoedown scene.

How do we find positive connections in such a situation? One way is shown to us by the young “Boy” Anderson (Pilot Bunch) who is best friends with a young black, Gabriel (Caleb Baumann). Considering the historical period that sort of friendship was a work of art. Founder Brian Clowdus directed this enticing show, which runs about 2.5 hours with an intermission.

Seating is outdoors but comfortable with easy close-up stage views. You park a short walk to the seats, and there are plenty of concessions available. But, please know if it starts to storm, you may wish to have a raincoat and umbrella. This one has plenty of gun fire, albeit the guns are never aimed at the audience. And Yes, a lot does come out right in the end, but there is angst aplenty on the road to salvation.