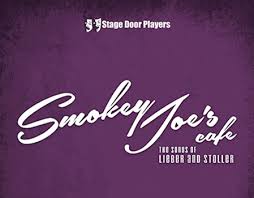 If, like me, you were around in the 1950’s and playing the part of Fonzi, you will remember fondly the music of Jerry Leiber and Mike Stoller. Although, if you are like me, you will not have a clue who they were but you will recognize their music when you hear it.

Smokey Joe’s Café is an exuberant cabaret rendering of more than thirty numbers that will take you back to days of your youth. If you are a youth and you were not around in those days it will take you to a never-never land when life was simpler, when people could hear the music and actually understand the words being sung, and we all moved to the pace which we thought was frighteningly fast in those days, but which in hind-sight appears to have been almost prehistoric.

Yes, these were such songs as Kansas City, Fools Fall in Love, On Broadway, and Hound Dog. You may not remember the words but you certainly know lines like “You Ain’t Nothin’ But a Hound Dog.” In fact, most of the audience was singing along in Yakety Yak and again in Charlie Brown (you’re a clown). There is hardly any dialog in this and there is a straight presentation of musical numbers that are stitched together. As a result there are no character names associated with the performers.

Suffice it to say that you certainly will recognize and applaud their ambition; so dig out your old Elvis records, rehearse the words, get into your best bell-bottom pants and Nik-Nik shirts and get over to Dunwoody to take in this evening of musical memory. Free parking and good seating. More info at StageDoorPlayers.net