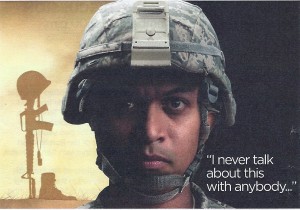 The Atlanta Opera Discoveries Series opened a production of David T. Little’s Soldier Songs at The Rialto theatre downtown. This tribute to the men and women of the Armed Forces was premiered on Veterans’ Day and will close on Sunday matinee.

To get the situation straight, this is not your grandmother’s idea of opera. There is a score with no memorable melodies, one lead singer, a libretto which is quite strange; and certainly more stress than even in a Wagnerian opus.

Matthew Worth is a vet who doesn’t often speak of what he went through and witnessed in warfare and after. Yet, he does so for an hour, as we hear him repeat his feelings and memories in this bit of Sturm und Drang sung in English with supertitles. The orchestra in under the baton of Christopher Rountree.

The work is one which would not be very entertaining for those who have lived with PTSD themselves or in their families. Let’s just say that it is certainly not for the kiddies, and maybe not for some of us who have lived through WWII, Korea and Nam; and understand that the inhumanity of man is not about to vanish from this sphere. For as George Santayana opined in 1896, “Those who cannot remember the past are condemned to repeat it.”

This production moves along with a static set which is brought to life by a very complicated and effective series of projected images. Were it not for the lighting and projection, it would be as engaging as a solo cantorial recital. One can appreciate that it is a paean to our men and women who have served, whether they sought to do so or not. It may not have legs as they say in show biz, and is not an audience builder like Boheme or Carmen. But you may wish to see it and applaud our Opera company for producing it in honor of our vets.