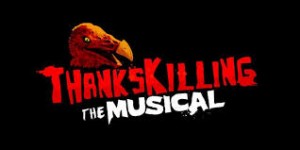 Once an indie film then a play is being stage by Dad’s Garage at 7 Stages in Little 5 Points. And it is a hoot. You may want to gobble this one up. Dan Triandiflou has brought together a hard working cast of 7 players doing more than 15 roles.

Basically it is a weird story of some college kids who hit the road at Turkey Time, and run into an evil Turkey who has come back from the dead to seek revenge. And all hell breaks loose. Let me warn you that this is NOT for the youngsters nor Ms. Prim. There are plenty of expletives as well as sexual single entendres. The five who hit the road are the virgin Kristen (Alexandra Flicken), the slut Ali (Erin Burnett), the jock Johnny (Ben Davis), the hick good-ole-boy Billy (George Faughnan) and a nerd named Darren (René Dellefont).

Taylor Roy plays a whole gang of characters as well as acting as a game show host for the audience during the show. The killer turkey is Clint Sowell who really should get stuffed and baked, but he’s hard to finish off.

It’s a weird kind of production, but one that is filled with plenty of laughs. Let’s face it; there is just so much standard holiday cheer that we need. The audience is drawn into the game in this one, and you can tell that the performers are having as much fun as we are. You are at liberty to imbibe during the show, and actually encouraged to do so.

They play Thursdays, Fridays and Saturdays at 8pm. And the easiest place to order tickets is at DadsGarage.com. If you get there in time, there is usually some free parking right across the street where you’ll see their sign at the driveway. Keep in mind that if you are coming down from the burbs, that traffic these days is insane. So allow and extra half-hour and you’ll be happier and more at ease when you get there.