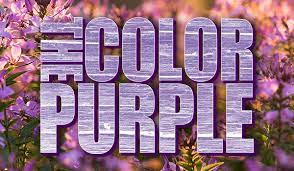 The Color Purple
City Springs Theatre
through May 22, 2022

The original Color Purple was a book by Alice Walker, and was also brought to the screen by Warner Brothers. This adaptation by Marsha Norman is an intense musical of more than 24 numbers with music and lyrics by Brenda Russell, Allee Willis and Stephen Bray. This production is directed by Kamilah Long, with a hard working cast of more than 20 actors who come to us in the show from their small town in in the South in the days when a woman of color was treated as chattel by her own people.

A center point of the story is about a young girl, Celie (Felicia Boswell) who is trying to find her way through the miserable life she is experiencing. One of the principal male rolls is that of Mister (Gavin Gregory). Kayce Grogan-Wallace shows up as Sofia, a role she had played before; and Safiya Fredericks is Shug Avery, Trevon Davis is Harpo and Latricia Akhagbeme is Nettie alongside Jalise Wilson as Sqeak.

With a hard working Iive orchestra in the pit under the baton of Derrick Jackson, the story unwinds the lives of these poor folk and what belief, if any, they may have in an Almighty, and where, when and how they may fashion a meaningful life. It is especially poignant these days with what is going on in this world and this nation.

The show runs a little over 2 hours with an intermission and every seat in the house has good view. Plenty of garage and/or valet parking and concessions. You may not leave the theatre belting out the songs; but the experience shall forever be engraved in your memory; and as the Bard opined; The Play’s the Thing.

More info and tickets at CitySpringsTheatre.com