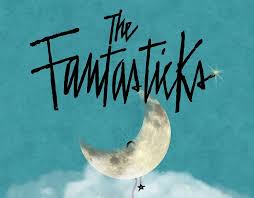 It’s hard to believe, but this work is more than fifty years old and has incredible legs, running more times than any other so-called musical shows.

It is said to be derived from Rostand’s Les Romanesques, but also reminds one of the Bard and the Montagues and Capulets. And it really is a play within a play. It is most often performed on a very stark stage, with few props, and 2 or 3 musicians and a cast of 8 players, one of whom is a mute.

In this production, directed by Zip Rampy, the show is put forward by Jody Woodruff as El Gallo, a conniving actor/producer/etc. El Gallo is styled as The Narrator. And the story is about a couple of gents who are neighbors. One has a son, the other a daughter, and they want the kids to fall for one another. So what’s a parent to do? They say NO WAY and they build a wall between their properties and families.

But what’s a kid to do? Climb that wall, of course; and the tale goes on. Luisa (Meg Harkins) is a 16 year old coming into herself, and Matt (Aaron Hancock) is now a 20 year old alleged adult. Except neither of them is particularly worldly.

Joel Rose is Matt’s dad, and Chris Davis is Luisa’s. They figure out how to run a scam on the kids to make Matt come off as a hero. And El Gallo brings in a couple of troubadours who will try to pass themselves off as abductors of a piratical nature. Evan Hussey and Mickey Vincent are the ones who pop out of the trunk.

The score is certainly not like big-scale musicals such as Show Boat, or Oklahoma. It is more a cabaret style and the one tune most will recall is Try to Remember. It was originally sung by Jerry Orbach and has since been recorded by a host of others. The rest of the numbers may be less memorable to most viewers.

Young Sarah Carroll is the mute, who brings to mind the old advice to an actor to never share a stage with a child nor a dog. They steal the focus, and she is really cute. The cast does a good job, with two players on keyboards and nobody dies in this one; and true love finds it’s way to the youngsters.

For more info and tickets visit them at Act3Productions.org