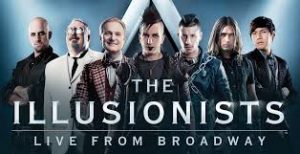 The Illusionists
Fox Theatre
through October 2, 2016

If you enjoy magicians of various genres then this is a show that feels as if it is right out of Vegas. They started in Australia 4 years ago and have been touring around the world to some great audiences.

The principals consist of 7 performers, and there are another 5 assistants who help to move things along. One great aspect of the show is that they have live video coverage of what they are doing and it is projected onto a large overhead screen at stage center, so that every seat in the house has a great close-up view.

A few of the schticks are a little gross, and probably not for the kiddies. Like the Houdini type of escape from a water cell by Andrew Basso. Or, the one when Dan Sperry, the Anti-Conjuror, moves a coin trough his eyeball to his arm. Like fire-eating; these are tricks you do not want to try at home.

Ben Blaque comes on as the Weapon master who uses his crossbow in a way that would make William Tell soil his underwear. And Colin Cloud does his mind reading as you figure he has to have background info in the audience participants; but if they’re shills we’ll never know.

The Inventor is Kevin James, and he is a delight with his origami and other creations. He can really snow the audience. And young Yu-Ho-Jin is probably the best card worker you’ve ever seen. It makes you glad they have the close-up shots for you to see.

And if you like somebody who comes off like a Liberace, then Jeff Hobson is your man. He is sort of emcee and also works the house as he is The Trickster.

Overall, it is a show with great production values, and there are plenty of seats available due to so many people watching politicians who seek to magically capture your mind, or what may be left of it.

For more info and seats, just Google or go to FoxTheatre.org