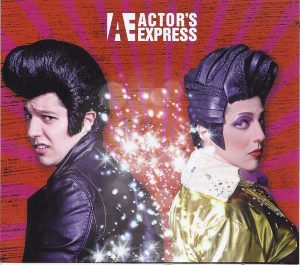 The Legend of Georgia McBride
Actors Express
through April 16, 2017

Once upon a time a hard-up performer tried to make a living doing his Elvis impersonation.  But the crowds weren’t overwhelming.   He was going to be replaced by some drag queen act, and as things went awry, he would up being drafted into the performance.

Meet Nick Arapoglou, who comes on as Casey, the Elvis wanna-be.  He’s been on many a stage here in town, but this may be the first time he wound up in drag.  Will he be able to carry it off?   Well, you really are going to want to see this one and make your own judgement.

The drag queen who brings him into his act is played to the hilt by Jeff McKerley, and he and Nick really do quite a number, or several numbers. . . .

Casey is married to a lady who is with child.  Her name is Jo, and she is played by Falashay Pearson.  There is one little problem; in that Casey felt it might be inappropriate to tell her how he was making ends meet, and she freaks out when she finds out.

Thandiwe Deshazor appears as Rexy, who was supposed to be in the drag act but wound up getting schlossed and replaced by Casey.   But, you’ll get to see him in his gussied-up mode as well.  He also doubles as Casey and Jo’s landlord, who feels he should be paid rent on time.

Eddie is the club owner and emcee of the show and is played by Al Stilo.  He’s got to fill seats as well as glasses if he wants to keep the joint open; so as they say, you gotta do what you gotta do. . . .

Portia Krieger came to town to direct this one, and the set and cabaret style seating, works quite well.  It’s a one act that runs about 90 minutes, and is a real treat.  You can get there easily and plenty of adjacent parking.  More info and tickets at Actors-Express.com