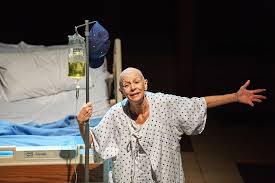 Margaret Edson, a/k/a Maggie, has been a teacher here in the Atlanta area for quite a few years. In the mid-1990’s she penned this play about a very educated woman who had been diagnosed with stage 4 ovarian cancer. It had a hard time getting to stage, but finally made it; and made it big as it won a Pulitzer Prize for drama in 1999, and went to the screen in 2001 with Emma Thompson as the ailing Vivian Bearing, Ph.D.

It is not a play for youngsters, and could be very difficult for those who’ve been at the side of others who were on the down-slide with cancer treatments. It depicts real life treatment situations, with many props that have been borrowed from hospitals. A static set is changed quickly by the insertion and removal of various props such as a hospital bed and other appliances.

Mary Lynn Owen is Vivian. She’s dressed only in a hospital gown and baseball cap. It’s not an easy role to play. As Emma Thompson did, she shaved her head, to come on as one who has been through a chemotherapy trial as well as radiation therapy. She reminiscences about her career and her attachment to the metaphysical poet John Donne. So, as she faces the inevitable she reflects upon Donne’s descriptive dealings. Not exactly a Dr. Seuss sort of approach.

Her oncologist is Dr. Kelekian, played by Chris Kayser. He is very short on patient involvement, as are most of the medical folks except for nurse Susie (Tiffany Mitchenor). Justin Walker is Dr. Posner who is a staffer and does make rounds seeing Vivian.

One may wonder why some houses wish to produce a play which may not be an audience builder. In the case of this theatre, the Artistic Director and Associate Producer are both cancer survivors and have a deep interest in the processes being developed to help those who may come in contact with the Big C in years to come.

Tlaloc Rivas has signed on as Director, and the cast puts forth a powerful and moving performance; albeit this is one that has few laughs and mirrors life as we may unfortunately know it.

For info and tickets visit AuroraTheatre.com