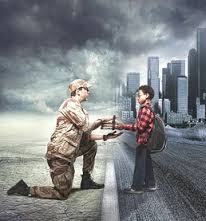 This is a world premiere of a work by Lane Carlock and Brian Kurlander. It is not the usual sort of drama, inasmuch as it takes a while to try to figure out WTF is going on.

We meet a young man (Royce Mann) who is diddling on his computer or iPhone, and he gets a skype call from his soldier dad (Bobby Labartino) who is in Afghanistan. Dad sees the son has a black eye and wants to know how it happened. The boy doesn’t want to discuss it, but finally fesses up that he got into it with some bullies who dealt it to him. And that’s when Dad tells him he’s got Moxie. Not the Moxie that is a carbonated drink, but the Moxie it takes to stand up for what’s right.

Dad starts to draft a book he titles as Moxie and will send it to his son. And then we go through a series of vignettes as the Moxie diary travels to Paris to the home of Madame (Carolyn Cook), to someplace in India, to several other countries and ends up in a town like Detroit. I tried to recall the story of an old Jewish manuscript, or maybe it was a Torah, which wended it’s way from Venice to Shanghai and elsewhere, carrying with it the stories of each venue.

The authors are working to portray that as they say it, “Whatever affects one destiny, affects all.” And maybe that could also remind us that “Those who cannot remember the past are condemned to repeat it.” (George Santayana) Interesting in this, an election year . . . .

Young Jaden Robinson does a neat job when he gets involved with the book and with the bookbinder (David De Vries) who needs to repair it. Makes you understand why so many actors hate to share a stage with animals or youngsters of talent.

Directed by Elisa Carlson, the show is set on a pretty basic stage, but the lighting design and projections onto the backdrop screens really makes it move very easily from one part of the tale to another.

The show runs about 90 minutes without intermission. Easy to get to and park in the garage just north of them on Luckie Street, and you can buy your $4 discounted parking ticket at the theatre ticket booth. For more info and times visit them at TheatricalOutfit.org