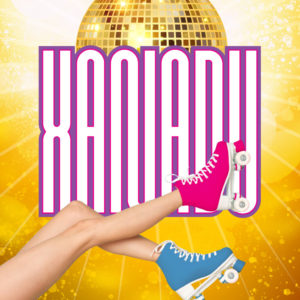 This riotous and exciting show is a co-production with Georgia State University, whose cast will take the stage on November 10th. So get your buns in gear and get your seats early. For OutFront is back now after a 19 month hiatus. And while so many theatre groups have started back up with smaller productions during these crazy days; OutFront under the management of Paul Conroy has come back full steam with a totally first class professional production.

For who wouldn’t want to live in a perfect world? Call it a paradise or maybe even Xanadu. If you’re a student of history, please know that this Xanadu is not the one that Marco Polo had originally detailed. It’s a camped up story of a goddess, Clio (Anna Gonzales) who inspires a lackluster artist, Sonny Malone (Russell Scott), and falls in love with him. There are some problems for her, however.

As a goddess she is forbidden to get hooked on a mere mortal. Being a muse is OK, but being his main squeeze is not. So what’s a goddess to do? She decides to pose as an Aussie. She’s doing her best to inspire Sonny to follow his dreams, and help to transform a decrepit theatre into an arts center.

Unlike the works of The Bard, in this case the play’s not the “thing.” The story is inane, and it is the staging, the music, the choreography and the ensemble that make it fly. This fast paced musical was first staged on Broadway in 2008, and has received many accolades. It’s not the usual thing to have actors skating around on stage.

Clio is being sabotaged by some of her jealous sister muses, players by Arianna Hardaway, Brandy Sexton, Max Mattox, Precious Anika West, Emily Dean and Bradley T. Johnson. As are each and every one of the cast, they are a scream. OK. So sometimes they scream, and most of the time they plot and sing and dance.

Clint Clark-Duke comes on as Danny Maguire, the typical land baron whose order of priority is about the same as most of today’s bankers and politicians.

With good music managed by Gamble, cool choreography by Tyler Sarkis and so precisely directed by Paul Conroy, this is one of those shows that is exciting, delivers the unexpected, and leaves you with a real sense of having spent a great evening. Even if you have seen the film, it ain’t the same as sitting a few feet away from the show and being able to interact with them.

Tickets and more info at their site: OutFrontTheatre.com