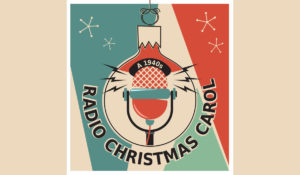 This one is a sequel to the 1940’s Radio Hour, and having some problems radio station WOV is broadcasting live from a little studio in a hotel in Newark, NJ. Clifton Feddington (Russ Ivey) is trying to keep the crew together as they work through a situation where anything which could go wrong does so. They’re going to go on air with an updated version of the classic Dickens work.

They’ve brought in a well known stage actor, William St.Claire (Paul Spadafora), who may be OK on stage but has little, or none, experience before a microphone. Buzz (Jake Pearce) is the young lad on the board, who is getting ready to go to war. It is 1943, and the war in Europe is raging, as well as in the Pacific. And, like the Andrews Sisters would have done with a USO Christmas, this cast of 11 players come stage center with many well done numbers.

Directed by Jonathan Goff with music by John-Michael d’Haviland, the show runs on a set which works quite well as hotel, studio, bar, control room, etc. And, of course there is a Tiny Tim (Paul Danner) but unlike the usual; not everything comes right in the end. For there is one scene where they spoof about Nazis, and that could be difficult for some older viewers, especially with what is going on these days.

But, it is a couple of hours of well performed entertainment, which often comes off as improv even though it is well scripted; and the actors are holding that script as they try to recall their lines.  Act3 is in Sandy Springs, easy to get to and free parking. More info at Act3Productions.org