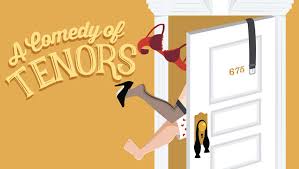 A Comedy of Tenors
Georgia Ensemble Theatre
through March 18, 2018

Ken Ludwig who wrote the prize winning Lend Me a Tenor, has written this sequel, with many of the characters you know from before. And, this one is a real riot, which Moliere would have enjoyed with one door opening as another closes and anything that could go wrong does so with great amusement.

Shelly McCook directs the cast of 7 players; each of whom is a pure delight. Harry Saunders (Robert Egizio) is under a load of stress. He’s staging a concert in Paris with world famous tenor, Tito Merelli (Brian Kurlander), who hasn’t shown up and if he has to cancel he is in a pile of you-know-what. He uses his son in law, Max (John Markowski), to run riot control for him to the extent that he is able to do so. Max’s wife is due to birth any day, and he is stuck in France with Harry.

They bring in another tenor, Carlo (Haden Rider), who is already seeing Tito’s daughter, Mimi (Lyndsay Ricketson). The story starts off with Tito’s wife, Maria (Courtnay Collins), witnessing what she assumes to be an inappropriate connection between Mimi and a certain gentleman. Maybe she gets it wrong. You’ll have to laugh your way through it. Both Tito and Carlo have problems, and Maria and Tito get into a real situation and each may hit the road.

Towards curtain time on the soccer field where the concert is to staged, a soprano, Racon (Lane Carlock), shows up and she has eyes, and more, for one of the gents. So you start to get the picture. Several singers, several misconceptions and some great acting and you will love the couple of hours.

I am not allowed to tell you how things go wrong, nor how they wind up; for the play’s the thing, and a great thing it is. More info and tickets easily available online at GET.org