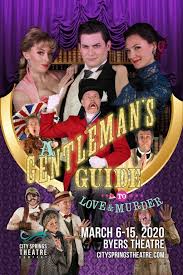 If you read the Autobiography of a Criminal or saw Kiind Hearts and Coronets, then you will love this adaptation, directed here by Brandt Blocker with the posh sets that took the stage at the Fox a couple of years ago.

This is a musical farce comedy about a gent, Montague Navarro (Haden Rider) who has learned that he is in line to become the Earl of Highhurst. The only problem is that he is 8th in line and can’t obtain the desired status unless, and until, those in line before him just happen to pass away. And that’s when he starts to figure out how he might help them do so, and as quickly as possible. So he starts to plan their demise and keeps writing his autobiography about his dastardly deeds.

The two ladies of interest for Monty are Sibella (Leigh Ellen Jones) and Phoebe (Katherine McLaughlin) and Googie Uterhardt, plays all eight of the would-be victims, and the costume changes are incredibly fast. The stage is set at the D’Ysquith Manor in London around 1909. The cast of 13 players pull this off with great aplomb, and go through 22 numbers with a live orchestra in the pit under the baton of Chris Brent Davis; and some great choreography by Cindy Mora Reiser. This is a hard working gig for such a relatively short schedule.

Sort of Sweeney Todd meets the D’Ysquith clan in Sandy Springs at the Byers Theatre. Valet and self parking easily available and a VERY comfortable facility. More info at CitySpringsTheatre.com