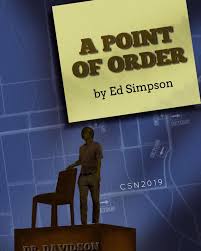 A Point of Order
Centerstage North
through October 19, 2019

Ed Simpson’s play, Point of Order, takes us to a small town he calls Randolphsburg, PA. But, for those of us who know small towns, it could be much closer to here, or almost anyplace else. The town is not one that is in a growth situation and some of the folks have gotten together and formed a committee to raise the funds to create a memorial statue to a former resident, who became an astronaut; albeit, he doesn’t live in the town, and most townies haven’t a clue who or what he may be.

Elizabeth (LeeAnna Lambert) is the chairwoman of the group and she loves her position and her gavel powers. The other four members on the committee are a teacher and band leader, Larry (Matthew Mindeman), shoe salesman (Reggie Harper), college professor (Steve Robey), and a gun-toting shopkeeper (Stacy Bowers) Jennifer and Kevin Renshaw directed this work on a set designed by Kevin.

If you’ve ever served on, or attended, a committee for some non-profits or local organizations then you will start to think this is a reflection of real life, not just a comedy. For Robert’s Rules of Order aren’t strictly adhered to by any of them. The issue is that they need to raise a load of money to pay the sculptor who is to create the monument, and the donations are not exactly flowing in. There are some serious possible legal issues that loom in the coming weeks.

But, there is one old geezer in the town who is a control freak multi millionaire. That’s the famous, or maybe infamous, Buck Drum (John Zincone) who could write a check to make things happen, should he care to do so. But, he has an ego problem that is pervasive. It reminded me of a board I was once on where a dozen other members, each of whom had wads of money I would never see, couldn’t decide how many rolls of toilet paper the custodian should buy. Duh! It was my first meeting and I resigned. But this is really a very entertaining meeting since you don’t have to vote on anything.

A short run, so act quickly and enjoy it. More info at CenterStageNorth.net