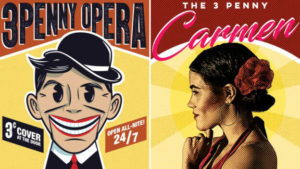 Our Atlanta Opera is performing under the big top once again; this time at the Cobb Center for the Performing Arts right by 285 and 75. They are doing a couple of camped up versions of old time favorites; The Threepenny Opera by Kurt Weill and Carmen by Georges Bizet.

The stage is at one end of the tent, and there is a runway through the center that brings the performers into closer view for all in the house. Carmen was written to be set in Saville back around 1820. While it didn’t get great reviews when it played in various countries back in the late 1800s; nobody knew that it was going to be universally enjoyed to this day. When you hear the music being played it resonates to your heart as you want to clap and sing along with Escamillo when he belts out the Toreador’s Song, or get up and start dancing by your chair when Sonia Olla struts out to you doing her Flamenco dances. Everything about the show is great, costumes, music, singing, dancing and a newer and quirkier story line. But it isn’t just about love sought, found, lost and buried. It is about bringing great pleasure to the eyes and ears of the audience. This production plays only two more times; Wednesday April 28 and Thursday May 6.

Running in repertory with other members of the Opera company is the story of Mack the Knife, written by Bertolt Brecht and adapted from The Beggar’s Opera set in London’s SOHO area. Tom Key comes stage center as the narrator and street performer but there are plenty more sots and ladies of the night, as Macheath (Jay Hunter Morris) works through his problems of finding love while the Bobby’s are on the lookout for him to send him off to the slammer. Of course, you’ll also want to sing along with Mack the Knife and about his pearly teeth. This one plays only 4 more times; Thursday April 29 and Wednesday, Friday and Sunday, May 5, 7 and 9.

Both shows are superb and a ton of work which deserves to be in a real auditorium. But, we all know that as soon as it makes sense to do so, that they shall once again take shelter. More info and tickets at AtlantaOpera.org