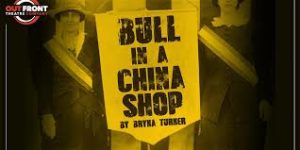 Bull in a China Shop
OutFront Theatre
through February 15, 2020

This all-female show by Bryna Turner is a real-life story being brought to light. For it is set at Mount Holyoke College at the turn of the last century, when it was an all-female seminary. The women’s suffrage movement is an important part of the saga, as are women’s places in society. Mount Holyoke was one of the “7 Sisters” which was the group of prestigious women’s colleges akin to the all male Ivy League. The play is performed in many scenes which are moved in and out of by short violin solos.

The playwright is class of 2012 from the school and she drew the inspiration for this work from papers and memorabilia in the college museum. We meet Mary Woolley (Daryl Lisa Fazio) who is the president. The real Woolley served as president of the school from 1901 to 1936; through one war and almost into another one. She was a woman who felt that there should be no restraints on females, and that included sexual preferences. For she had a long lasting relationship with Professor Jeannette Marks (Alicia Kelley); and like most relationships, not every day was a perfect one.

Mary Woolley often got into the face with Dean Welsh (Dina Shadwell) over personal matters as well as the curriculum. For while Holyoke was educating women for careers and achievements which may extend far beyond the kitchen and bedroom; that was not the normal attitude in those days. A girl was supposed to learn to spell, write, read, cook, sew and marry and procreate. Even in the 1940’s in high schools the boys all took shop to learn how to use tools, and the girls took typing so that perhaps they could land a career as a secretary. But, that was prior to the rise of Rosie the Riveter.

The cast is rounded out by Sofia Palmero, who is a student with issues, and Falashay Pearson who is the house manager at the President’s Manor. This production is being brought to us by the theatre in collaboration with Georgia State University and we should stand and salute them both. Considering the current concerns of society and issues addressed by the Me Too movement and others, the timing is spot on for this one.

The show runs in one act about 80 minutes and you are drawn into the characters and the action from the opening scene. This theatre company is a showcase for/to the LGBTQIA+ community as well as all of we humans with brains. On February 11th they will host a celebration of LGBTQ pioneers in the arts. More info at OutFrontTheatre.com