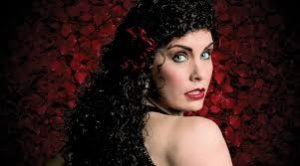 Carmen
Atlanta Opera
through May 6, 2018

Hurry up and get out to the Cobb Energy Performing Arts Center for one of the largest and most incredible performances by our opera company. If you have a young person you wish to introduce to opera, then this is the one you want to start with.

When Georges Bizet had this wonderful work staged in Paris in 1875 it did not win wide acclaim, and he became heart broken and died the same year at age 37; never having an idea how his opus would become one of the most often produced operas, in Italian, French, Spanish and even some other local languages.

This is one of the largest group of players you will see on a stage. Not sure how many but my guess is more than 75 in some scenes. We start in Seville with the soldier and the gypsies and the women working the cigarette factory. It is so special in today’s world, inasmuch as women were being treated more as chattel than as equal citizens.

The music is very reminiscent to most of us, albeit few, if any, can recall what is being sung. But it is the show that counts. Brenna Corner directed this wonderful production and the orchestra in the pit is under the baton of maestro Arthur Fagan. Carmen in sung to the Nth degree by Varduhi Abrahamyan and the two men who vie for her love are Escamillo (Edward Parks) the toreador; and the soldier, Don José, sung by Gianluca Terranova. The other love is Micaëla sung by Nicole Cabell. But the bottom line is that every performer to step on stage is wonderful.

In Act I, we get treated to the kids in the town who come to the plaza to see the soldiers, and these 17 young people must be in seventh heaven to be performing to thousands of people. May their each follow their dreams.

The opera is sung in French with English supertitles, and runs about 3 hours 20 minutes. While there are four acts, the final two are staged as one, and there are two intermissions. Plenty of garage parking adjacent to the venue. This is a grand production and we all salute Tomer Zvulun for his work with the opera. C’est fantastique.