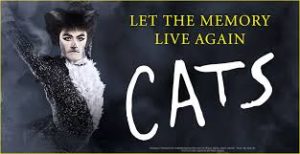 We get so many road-weary re-heated shows visiting the Fox that when we get one which really shines it provides an evening of pure enchantment and entertainment for everyone. You know that Cats is a review of actors dressed up like foraging felines. You know the show stopping song “Memory” and quite a few of the others stick in your mind even though you don’t know any of the words. Perhaps you’ve seen the production on Public Television, or maybe your kids like the video tape and play it often.

This writer has seen Cats many times in various cities, but this version is a little different in that it is much more choreographic than some previous editions. The producers did themselves proud by rounding up so many very good dancers who can also sing and act. Their balletic skills are quite evident from the opening number.

Keri René Fuller as Grizzabella wasn’t quite the same as Betty Buckley in years past, singing “Memory” at the end of Act I. But after the half-time she came back like a house afire when she reprised the number near the end of act two. Tion Gaston, as Mr. Mistoffelees, really makes you want to jump up and sing, “Oh, my, was there ever a cat so clever as Mr. Mistoffelees. . .” when you get treated to his solo ballet segment. He’s easily the best dancer seen in a musical here in a long time. And when Ethan Saviet comes stage front as Skimbleshanks the Railway Cat, we’re treated to a wonderful ensemble dance number in which parts of the stage trash magically become the railway train.

There isn’t any story line to concern yourself about. Cats is taken from T.S. Eliot’s “Old Possum’s Book of Practical Cats” which few, if any, of us have ever read, or would care to read. This is more like Lion King in that it is theatrical, spectacular, entertaining and allows one to escape from this world of lunatics into the make-believe world of Cats having their annual reunion in a junk yard. But what really is great is the dancing. They sacrificed none of the singing, sets or costumes and makeup but they added wonderful dance to further delight the eye.
There was a live band, and perhaps some canned segments, but all worked perfectly.

If you have children that you want to introduce to musical theatre, this is THE show to bring them to. Their eyes will open wide, their smiles will stretch from ear to ear and they will sit transfixed in wonderment, even if they get a wee bit edgy in a couple of slow numbers.