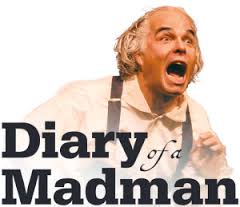 Diary of a Madman
Metropolis Theatre
through June 5, 2016

Metropolis Theatre is a local company out of Austell, GA. But for this production they are presenting in Atlanta where Syncronicity Theatre now plays at 1545 Peachtree Street.

Founding artistic director Prodan Dimov chose this work for some obvious reasons. Not that he is mad; just that he grew up in eastern Europe, knew the works of Nikolai Gogol, and had previously presented this show with the same leading actor about 7 years ago, and it received great praise. We thank him for bringing it back and directing it again.

The play is based on a sort story penned 180 years ago. You meet Poprishchin, who is a minor clerk in a local government office in Russia, in the days of Czar Nicholas I, and when the elite led very special lives compared to the serfs and peons who got minimum wages and respect.

Jon Hayden reprised the role of this worker who goes off his rocker. And it is an incredible job. Not only is this a one-man show and he has to recall every line of a 90 minute diatribe, but he also has to waiver back and forth through several personalities as he recites his diary entries. He eventually gets the attention of his superiors who decide to send him to the asylum; for he has determined that he is really the heir to the throne of Spain. He doesn’t even really know where Spain may be, however.

The energy that Jon Hayden projects to the audience is beyond all limits as he draws you in from one scene to the next. He falls for Sophie, the daughter of his boss. You’ll not meet her, but he becomes immersed in what he believes to be the spoken and written comments of her pet dog. It is interesting in that the animal speaks Russian, not Doglish. It really gives one paws to consider.

And his sense of time gets a bit warped since he starts off in early 1800s and final entries are on the 43rd of April 2000. How would I rate this one? I think if Evgeny Lebedev were sitting in the audience he would be the first to rise up in applause. Yes, there are underlying thoughts about the contemporary society, but as The Bard would say, “the play’s the thing.”

The venue is easy to get to, and you don’t have to feed the meters after 7pm. For more info on this show go to Madman2016.com