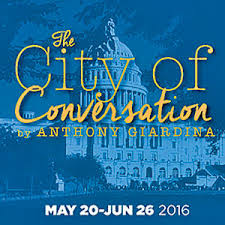 The City of Conversation
Horizon Theatre
through June 26, 2016

This tale of politics and relationships is brought to us in a stately home in the Georgetown area of DC, and it starts in the days of the 1970’s and runs up to the early part of this century.

I think most of us might agree that ours is not a democracy, but an oligarchy. Politics is a business and politicians are for sale. Think about it. Why would somebody want to be an elected official? I was taught at an early age that it was always good to have a friend at court. Ergo, if you have a hefty wallet you may want to donate to both parties and thereby insure your continued welcome sign.

So we meet a superb cast under direction of Justin Anderson, who are coming and going from the home of Hester (Tess Malis Kincaid) who has her libertarian agendum. Her son, Colin (Justin Walker) has shown up on a day when she is expecting some special guests with whom she wishes to discuss some pending legislation. It’s not that sure what her connection is, but she is working with help from her sister Jean (Carolyn Cook) who is helping her out in so many ways. Hester comes off in some aspects as an adult spoiled child.

Colin has his fiancé, Anna (Rachel Garner) with him. They’ve both been graduated from the highly esteemed London School of Economics, and while they know that their diplomas can be a green card for posh jobs in DC, they have significantly divergent views from Mommy-Dearest, who takes exception to Anna’s apparel and deportment and to Colin’s hair style.

The big shot dinner guest is Chandler Harris (Chris Kayser) who is a proper gent, but does have some non-governmental interests in Hester. Then the other political couple come to dine. They are Carolyn and George Mallonee, played by Deborah Bowman and Allan Edwards. While Chandler and George are up for following the old boys procedure to discuss matters after dining, that isn’t going to get them an escape from Anna. And Carolyn and Hester are obviously not cut from the same cloth.

Some of the political jazz relates to the days in the 1980’s when Reagan wanted Robert Bork confirmed for the Supreme Court, and all the aggravations that it stirred up. The nomination was not confirmed. Then we meet the players in a scene when Colin is also in the political circus but is not on the same team as Hester. But, Hester is grandmother to their 6 year old son, Ethan (Vinny Mantague). All hell breaks loose over some words which may have passed to, or been overheard, by the youngster; and the family then evolves into a truly dysfunctional gang. And as the years pass we find the grandson Ethan, now 27, coming to visit Grammy. He’s accompanied by his partner, Donald (Joshua D. Mitchell), and as the scene evolves we understand the nature of their partnership. Where will this go, and who will connect with whom, may be the question as the act closes.

But, after all is said and done, we have a situation in which a parent is condemned in some manner by an offspring for unacceptable behavior; and who is going to seek redress, who may wish to atone, and all the sort of angst that so many families can stir up in our time. And it makes one think about our government and those who run it that as the French may say, “The more things change, the more they stay the same.” C’est la vie.

For more info and performance times, visit them at HorizonTheatre.com