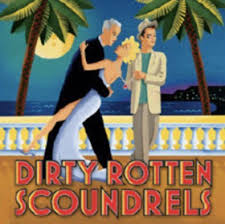 Back in 1988 Michael Caine and Steve Martin were on screen as the two con artists working the wealthy ladies in Provence. The writers had actually adapted the story line from their earlier work, which was a 1964 film starring Marlon Brando.

This stage work was scored by David Yazbek for a book by Jeffrey Lane, and it was nominated for more than 10 Tonys when it ran in the Big Apple. This presentation by Atlanta’s Lyric Theatre brings to stage a cast of 17 players, every one of whom is spot-on. The story is about Lawrence Jameson (Bryant Smith) who comes to the Riviera in tourist season to work his scam. But, a drifter, Freddy Benson (Chase Peacock) invades his turf, albeit he lacks the panache of Jameson. They get on to each other and work the crowd, but they are always competing. Their gendarme buddy, Andre (Steve Hudson), gets a piece of the action for aiding and abetting their activities.

Several ladies come to town. Christine Colgate (Galen Crawley) who may not be quite as well off as they believe her to be, and who may have her own agendum. Muriel Eubanks (Jessica De Maria), and cowgirl Jolene (Allison McDowell) who is a good ole gal from OK, and could be a stand-in for Annie Oakley.

The guys have read that there was a competitor known as The Jackal working the Cote d’Azur, but they figured they had their own turf well covered. The show moves along with more than 20 numbers, and has great costumes and dance numbers. Directed by Rick Lombardo and choreographed by Lauren Brooke Tatum, it is performed to canned music which is expertly synched to the action by Paul Tate, and the lines have been camped up a bit to be more relative to events of our era.

The show is VERY professional and the Lyric is easy to get to on the 120 South Loop in Marietta. More info and tickets at AtlantaLyric.com