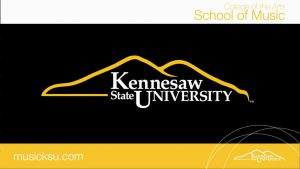 KSU has grown exponentially in the past decade, and their School of Music is so vibrantly alive in our community.

Just this week they presented two really professional concerts at the Bailey Performance Center. On Wednesday they took to the stage in the 78th performance of this year’s concert season. The KSU Symphony Orchestra, under the baton of Nathaniel F. Parker, brought forth ”Scenes from Bohemia and Spain” the “Hungarian March” by Berlioz, “Die Moldau” by Smetana, and three dance numbers from Manuel de Falla’s “Three Cornered Hat.”

David Lindsey on trumpet was featured in the Concerto for Trumpet and Orchestra by Henri Tomasi. The orchestra, with most of their fifty players on stage, just captured the house, and everybody left feeling satiated.

The following night, in their Signature Series, two of the KSU Jazz Ensembles under the direction of Sam Skelton and Wes Funderburk brought down a full house with an evening of great standards such as Stardust, When I Get Low I Get High, and Autumn Leaves.

Visiting musician, Allen Vizzutti came center stage in the second half of the concert and blew the house down with his numbers such as Malaga and I’ll Remember April and others. He also knows how to work the audience as well as musicians, and the final number was one in which he and Sam Skelton were forced to play off against one another.

Tessa Walker, Kristin Houston and Rebecca Miller joined in as vocalists on several works, much to the delight of the audience.

I know you may have missed these two sweet evenings; but there are sooooo many more to come. You can visit the website at musicKSU.com and scroll down to a list of upcoming events. The performance center is a first class facility with very good seating and sound. The campus is just north-west of I-75 at Chastain Road. Easy to get to, and free parking. Try it, I guarantee you will enjoy your experience.