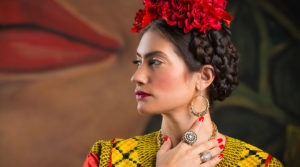 The intriguing story of the life of Frida Khalo, told in this carefully researched opera by composer Robert Xavier Rodriguez and script book and lyrics by Hilary Blecher and Migdalia Cruz, is truly unique. It is unusual in many respects. Sung in English with some lines in Spanish (both languages in supertitles), opening with a dance number, and quite a few spoken lines. It takes us back to the days between the two World Wars when Mexico was in turmoil, the Russian Revolution was in progress, and the world was wondering what would happen next. The eternal truth existed in those days inasmuch as a tiny percentage of people controlled the greatest mass of assets and powers, be they democratic or socialist.

Frida had lived a very difficult life with severe health issues and a marriage that was more of a mirage. In the 1920’s life was not easy for the average Mexican. Women were not at the top of the business, social nor creative lists. And for Frida, life was her work of art, and she endured for the main purpose of finding a reason to exist on a daily basis. In addition to the relationship problems with her philandering Diego Rivera, she had her own family issues to deal with, including a younger sister.

The show opens with some ghostly dancers with dead skulls as seen in the Día de los Muertos parades. And these ghosts continue to show up many times as Frida can never erase from her memories some of the events she has witnessed and/or experienced. A cast of 13 includes Catalina Cuervo as Frida, Ricardo Herrera as Diego and Maria Valdes as Cristina Kahlo.

Each player takes the stage to perfection, under the direction of Jose Maria Condemi and the full Opera orchestra in the pit under the baton of Jorge Parodi. Atlanta choreographer Ricardo Aponte brought some moving action to the stage as well.

While this work of historically researched art first premiered more than 25 years ago, it is the first time we’ve been privileged to experience it as part of the Opera’s Discoveries Series; and we stand and shout Thank You to Tomer Zvulun and the entire company of our Atlanta Opera for this engaging performance.

The opera will perform at the Byers Theatre in the new Sandy Springs Performing Arts Center just off 285. Show dates are only October 9, 11 and 13. More info at AtlantaOpera.org